NEW PROTECTED AREA IN COLOMBIA. !FROM THE INDIGENOUS RESGUARD EPERARA SIAAPIDARA OF CHOCO BIOGEOGRAPHIC TO THE WORLD!  Spanish version

Indigenous communities of the Eperãra Siapidaarã People in department of Cauca Colombia (Saija Key Biodiversity Area in the Choco Biogeographic), in an unprecedented act incorporates its K´õk´õi Eujã Natural Reserve – Territory of the Golden Poison Frog to the National Environmental System of Colombia in the category of Regional Protective Forest Reserve (Category VI UICN).

This is the largest area of Colombia for the conservation of the golden poison frog (Phyllobates terribilis) 28.766 acres, which represents 56.9% of the territory of the Calle Santa Rosa Indigenous reservation of the Eperãra Siapidaarã indigenous people 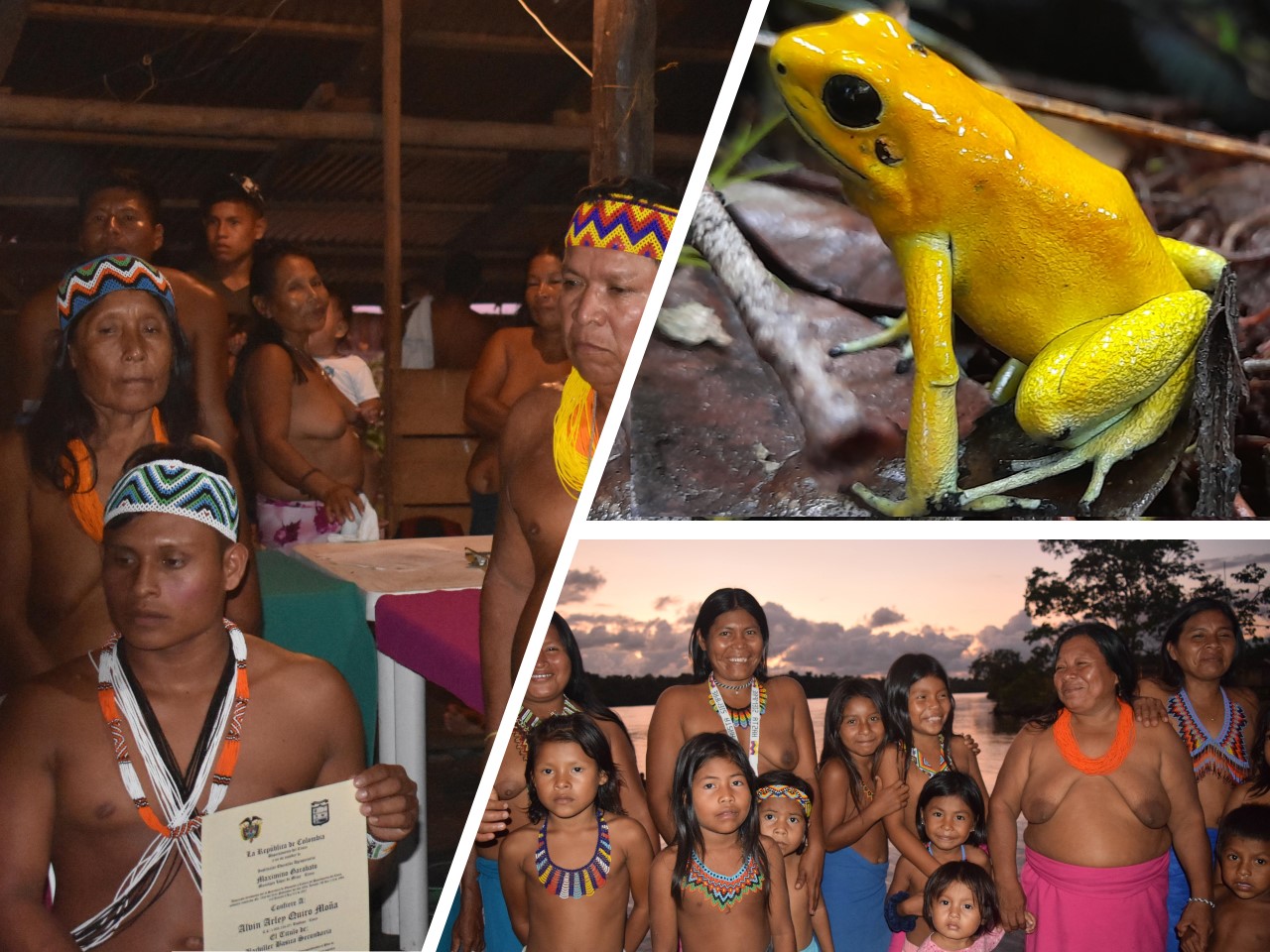 This process was born in 1995 at the initiative of the Eperãra Siapidaarã and was resumed in 2017 through the support of the Ecohabitats Foundation in coordination with the Cauca Regional Environmental Authority (CRC) with support from the Rainforest Trust.

Today October 28, 2020, in the ordinary virtual section of the Board of Directors of the CRC, with the participation of the indigenous authorities and representatives, the Vice minister of the Ministry of Environment and Sustainable Development of Colombia, the National director of National Natural Parks, the director of Ecohabitats Foundation, the director of the Alexander von Humboldt Biological Resources Research Institute, the vice president of strategic initiatives of Rainforest Trust, the director of International Conservation and the honorable advisors of the CRC, the administrative act establishing  the Regional Protective Forest Reserve Kokio Eujã- Territory of the Golden Poison Frog was approved.

Faced this event the director of the Ecohabitats Foundation Dra. Liliana Patricia Paz – expressed “ The Regional Protective Forest Reserve Kokio Eujã and its humid forests of Micay, with endemic and threatened species such as the golden poison frog (Phyllobates terribilis) and the Anthurium siapidaarae plant, recently reported as a new species for the science, together with its caretakers the indigenous Eperãra Siapidaarã identified as an ethnic group in danger of disappearing according to the Constitutional Court, today contribute to the global conservation goals in the Saija Key Biodiversity Area within the framework of their own law.

A special recognition to the Tachi Nawe (supreme spiritual chief and priestess) and to all the women in the Reservation for their active participation and contribution in each of the meetings in the territory, printing their clear and objective vision in conservation”.

The coordinator of the protected area Robinson Quiro, under the support of the indigenous governors affirmed “For us, the Eperãra Siapidaarã ethnic group, is a great satisfaction to have achieved this recognition as an area that is part of the National System of Protected Areas, this help us to protect even more our territory from threats by crops, mining and invasion to our reservation and to maintain the Kokoi frog, as the cultural and spiritual symbol of our people.

The director of CRC Yesid Gonzáles Duque added that this example of institutional and community articulation constitutes the route for joint management in the environmental management of the territories, also highlighting the role of Ecohabitats Foundation in the conservation processes of the departmental biodiversity.

Finally, the vice president of Rainforest Trust, reaffirmed his congratulations for this process, cataloging it as an example in the identification and participatory establishment of protected areas, also expressed his support and accompaniment in the process to the Eperãra community.